Garmin recently released a new version of Training Center, which added a nice feature: Direct export of trainings to Google Earth. So I was anxious to see, if this would obsolete my own converter. To get the complete picture, I decided to compare several converters that are available on the web. Of course I am a little biased, but just wait and see...

The contenders are
Noncompetitive participant is foreconv, which was not able to convert the format exported by the current version of Training Center. If you want to do the conversion yourself (maybe even with another converter), you can download the history file exported from TC.

I have to admit that this comparison is not really fair. All programs have different scopes and do a lot of different things. GPSies and GPS Visualiser can read and write many different formats, compared to my converter which reads TCX and writes KML exclusively. But let's have a look anyway. 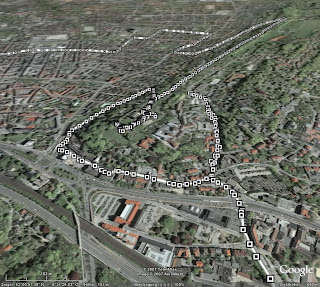 The big advantage is of course, that you don't need any intermediate steps, like exporting a history file from TC, uploading this to one of the other converters and then loading it into Google Earth. All the data is present in the generated file (like time or distance elapsed, heart rate and cadence), alas only in text form. The track consists of many dots, which display the information when clicked on. Only the track itself is shown - if you can see it through all the small icons. 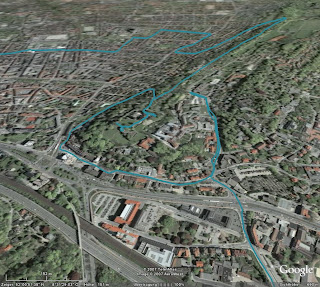 GPSies does far more than just converting various input formats (among them GPX, TCX and PCX5) to different output formats (Google Maps, Google Earth and many GPS applications), it allows you to store your tracks and share them with other people. It is a big community of GPS users.

But for now I am only interested in the converter. The first problem was, that it did not accept the current format exported by Training Center. But GPSies uses the Garmin Communicator Plugin, which allows direct upload from the GPS device to a web application, so I used this method. Unfortunately, only the track is visualised, without any further information. 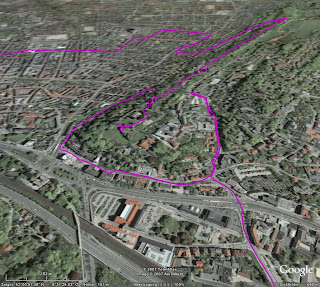 Like GPSies, this application can convert between many, many formats. Actually, it has two interfaces: A simple one and a more complex one. In the simple one, you just upload your file and the resulting KMZ file looks very much like the result from GPSies. The fun starts when you use the complex interface. 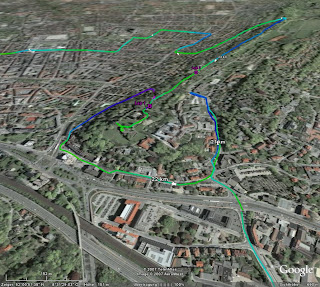 In this interface, you can configure many aspects of the conversion. For example, you can insert distance markers at given intervals, which are shown as small arrows indicating the direction. Or you can colorise the track according to further data, like speed, altitude, or, as shown in the example above, heart rate. You can tune and twist nearly every aspect of the resulting file. 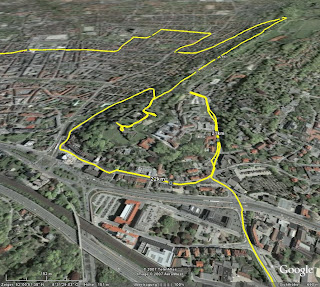 My own stab at this subject tries to visualise as many data as possible, but without scaring off the user with a complex interface. All data is put into the generated KML file, and you can select in Google Earth, which part you want to see. The image above shows the basic track and distance markers (which are shown only at a fixed distance of one kilometer). 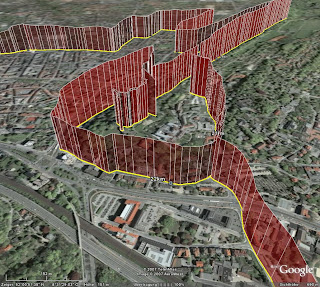 Optionally, you can display heart rate (as above) or cadence, if you have the appropriate sensors. Unlike GPS Visualiser, I choose to display this information with "walls" instead of colors (mainly because this was easier to do in XSLT). I think both methods have their pros and cons, YMMV.

As I said, I am severly biased. Considering my personal requirements, i.e. showing my GPS data in Google Earth, my winner is GPS Visualiser, but of course I have a soft spot for my own converter. I think in terms of ease of use, I can outrun GPS Visualiser. Another aspect is, that my converter (thanks to XSLT) seems to be very robust against changes of the export format of Training Center. GPSies (and foreconv) had problems converting the new format, while my converter needed no change. But of course, this is just as much luck as anything.
Eingestellt von Örn um 22:00 Kommentare: