Executive Summary: Please take a look at the new version of the Live Earthquake Mashup. If you find any problems, please let me know.

Two years ago, I started searching for someone to take over maintenance of the Live Earthquake Mashup. Up to now, I got no response. During the last few months, erosion of the page became a very imminent threat, and action was needed.

In December 2012, Google informed users of version 2 of the Google Maps API, applications should migrate to version 3 by May 2013. Although the API is still available, and will probably be for some time longer, Google has recently shown, that they don't hesitate to pull the plug even on useful applications with a large user base.

Last month, the other external part of my mashup broke, when someone at MIT had the clever idea to play around with redirections on the SIMILE web server, cutting off version 1 of the Timeline. The timing couldn't have been better, because I was away on vacation. I managed to post a page explaining the situation, but was able to repair the mashup only when I was back home. The outage is clearly visible in the usage statistics: 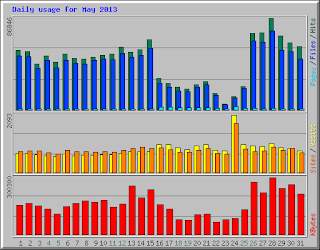 Luckily, when the mashup was back online, access count seemed unaffected. A sad reality of this episode was, that during the outage I was contacted by nearly as many people asking for the page, as in all the time since the mashup went online in 2006, and has been available without any significant interruptions since then.

With this experience, I decided not to wait until Google removed the old Maps API, or for someone to take over the page. I started rewriting the mashup myself. I decided to deal with the Google Maps API first, because that seemed more urgent. I fixed the Timeline problem by simply copying the JavaScript code to my server. That is clearly not an option for Google Maps. If that is gone, it is gone for good.

I encountered some problems while converting my code to version 3 of the API, the transition is not as easy as Google wants to make the developers believe. Another disappointment was the help offered by the community. My question was probably not very well articulated, so receiving only two answers was understandable. But all in all less than 10 people actually clicked on the link to even take a look at the page I had problems with.

Anyhow, after some struggles I finally was able to come up with a page that should give nearly the identical look and feel as the old mashup, although it uses the new Google Maps API:

As already mentioned above: Please let me know if there are any problems with this page. It will replace the current version of the mashup in a few days.

I will probably take a look at the Timeline part as well, and try to use version 2 of the Timeline API.
Eingestellt von Örn um 22:36

Works great - but why not using OSM as mapsource?

Does OSM provide a physical map that has the same appearance over all zoom levels? A few of the maps on www.osm.org look quite nice on a global level, but contain far to much details when zoomed in. The earthquake markers would get lost.

Besides: I just wanted to update the mashup, not completely rewrite it. Wanna give it a try???